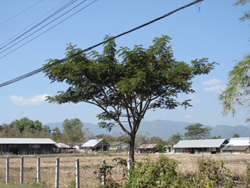 Acacia sprigs were planted by the Hebrew people at the head of a grave for 2 purposes:

1.  To mark the location of the grave.

2.  To show their belief in immortality.

Immortality:  Both the Hebrews and the Egyptians believed that because of its hardness, durability and evergreen nature, that this tree was a symbol of both innocence and immortality.

Shittim:  In the Bible, it is called “shittim”.  Chosen above all others, shittim was the wood which God commanded Moses to use to create the Ark of the Covenant into which Moses placed the 2 stone tablets upon which The 10 Commandments were carved.

Ark of the Covenant:  The entire chapter of Exodus 37 is devoted to the creation of the Ark of the Covenant.  The Ark was first constructed of shittim wood and then overlaid with gold before being placed into the Holy of Holies (Sanctum Sanctorum) in Solomon's Temple.

Hardwood:  The wood is a beautiful hardwood with dark and light coloring.  Due to this intermingled coloring, furniture and flooring made from its wood is both very durable, as well as exceptionally beautiful.

The tree is a thorny, and many times multi stemmed tree or bush which many would call a "scrub" tree because it never grows large and tall like an oak, walnut or many other hardwood trees.  Depending on the species, the seeds grow into either trees or shrubs, which are hardy in many climates, but they are not long-lived trees.  Their typical lifespan is between 30 to 40 years.

Deep Roots:    In order for it to survive in very dry, arid lands such as parts of Israel, Iran, Iraq, Australia, Africa, etc., it has very deep roots from which to absorb more water in arid lands.  Some species have roots which are 40-60 meters (approximately 120-180 feet deep).

Genus:  The genus Acacia belongs to the family Mimosaceae and is related to both the Locust and the Mimosa trees. There are approximately 1350 species of Acacia found throughout the world and close to 1000 of these are found in Australia.

Its most common name, world-wide is known as “Wattle”. which is Australia's national floral emblem is Acacia pycnantha, the Golden Wattle. Australians celebrate Wattle Day on the 1st of September each year.

Varieties:  Different varieties are common in many countries such as Australia, Africa, Madagascar, throughout Asia, Israel, Iran, Iraq, South America, southern parts of the United States as well as in the Pacific. They are found in a wide range of differing habitats from coastal, wet and tropical to sub-alpine (just below treeline), but are most prevalent in the arid and semi-arid areas.

Unlike most other plants, they will even grow on beaches and in rocky areas… near the ocean taking their moisture from the saltwater! 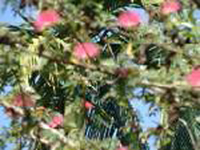 The Acacia Flower:  Each year the tree flowers.  Depending on the variety, the flowers can be yellow, white, cream-colored, or a reddish-pink).  Afterward, seed pods which are about three inches long, containing from five to six brownish-black seeds, ripen and turn from green to brown. When fully ripe, the pods split to release the seeds.

Seeds:  Interestingly, unlike most plants, its seeds have a hard coating which, in most cases, is nearly impervious to water, therefore, germination does not usually occur unless some sort of pretreatment is first carried out.

In nature, fire is the most common means of getting the seed pods to split open and reseed themselves.

As a Human Food Source

As a human food source, it has been a subject of increasing interest and research in recent years. Much of this work is based on understanding the traditional Aboriginal use of many of these species.

Wattle: While the seed from most of the wattle varieties are generally thought of as being poisonous or generally inedible, there are a few exceptions. Forty-seven species of wattle trees growing in southern Australia produce seeds which are suitable for human food. Some species of it are also used as stock food, for example, the pods of A. farnesiana (prickly Moses) and A. cambagei (gidyea) are eaten by sheep.

In both Australia and Africa, there are several species of the seed which are edible. Seed is eaten and prepared in different ways by indigenous (originating and living naturally, usually off the land) Aboriginal Australians and is beginning to be marketed to other countries.

Back to Freemason Symbols