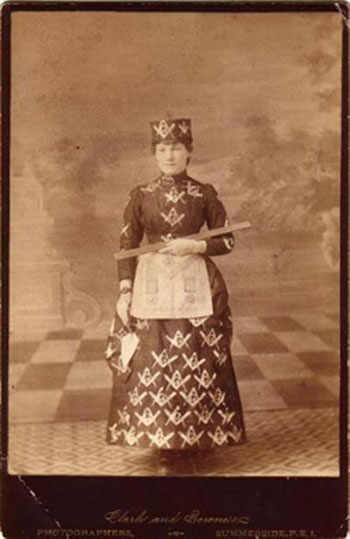 There are two groups of Women Freemasons.

There are Co-Masonry lodges, which admit both men and women.

There are Women Freemason lodges which admit only women.

Members of both groups take Freemasonry and Freemason Ritual just as seriously as their all male counterparts.

Ascending the chairs in their lodges is a much slower process than in the all male American Freemasonry, as much study and a very high degree of proficiency is required.

While "regular" Grand Lodges across the world do not formally recognize "mixed" Co-Masonry (male and female) nor Women's Masonry, in many countries there is a growing measure of mutual respect bestowed upon some of these groups, many of which use the same working tools, lectures and ritual as regular Freemasonry.

Parallel Fraternal Spirit:  Members of both Co-Masonry and Women Freemason lodges work toward the same Masonic ideals as that of regular male Freemasonry.  They wish to be of service to their fellow man and woman.

Le Droit Humain is an organization which admits women Freemasons to the craft, however they are viewed as clandestine within regular Freemasonry.

The term "clandestine" in Freemasonry means not formally connected with "regular" Freemasonry.

Womens Freemason Lodges and Le Droit Humain generally recognize each other and are free to visit one another, although their rituals and traditions differ in minor ways. 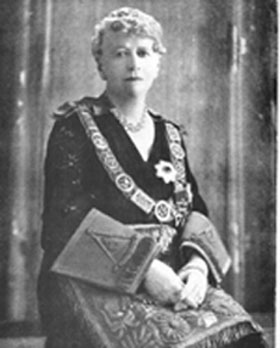 Women's Freemasonry is growing in popularity around the world.  Since  the early 1900s, women's lodges have become quite widespread in France.

For American Freemasons, whose Masonic education does not include the skirret (nor the chisel and pencil), and who, therefore, may not be familiar with the skirret as one of the working tools of the craft, below is a description of the skirret.

Skirret:  One Of The Working Tools

A skirret is a line of cord on a reel.  At the loose end of the cord is a stake.  Within Freemasonry, It is used symbolically to create a straight and undeviating line of conduct.

The spool of cord resides on a cord holder which freely rotates on a center pin.  We might commonly see this tool used by a gardener in which to create straight rows of crops.

The rotating cord holder reels out the cord which is stretched tightly.  In this way, the skirret was used to mark out straight lines to create not only straight rows of crops, but perfectly straight lines for the foundation of a building or edifice.

In most non-American, but English-speaking, all male regular Freemason lodges which work Emulation or similar or related ritual, the skirret is one of their working tools, as well.

If you are interested in learning more about Womens Freemasonry and Co-Masonry lodges, websites and contact information is below.

The oldest Masonic organization admitting both men and women is The International Order of Co-Freemasonry (IOCF), known as "Le Droit Humain", which was founded in Paris in 1893.  https://ledroithumain.international/

Droit Humain Headquarters: (The British Federation of the International Order of Co-Freemasonry) https://www.freemasonryformenandwomen.co.uk/

The Order of Women Freemasons in England  owf.org.uk


Co-Masonry in the United States

Women's Co-Masonry in the U.S.A.   http://www.womenfreemasonusa.com/  The official web site of the 4 U.S. Women's Lodges chartered by the Women's Grand Lodge of Belgium,.  This site also includes information about the history of women's Freemasonry, as well as about each individual lodge.

The photo of a female Freemason at the top of this page is the cover page of the book, "Haunted Chambers - The Lives of Early Women Freemasons", by Brother Karen Kidd.

It is a well-researched, non-fiction book about women Freemasons down through history within a currently male dominated craft.

Many Masons are familiar with the story of Elizabeth St. Leger, (1693-1772), who, upon being caught eavesdropping upon an Irish Masonic lodge while it was in session was reportedly made a Freemason.

This book chronicles not only several speculative female Freemasons from the early 1700s and later, but looks back into women's roles in Freemasonry during the time of the Guilds in the Middle Ages.

It is available on Amazon and other online bookstores.