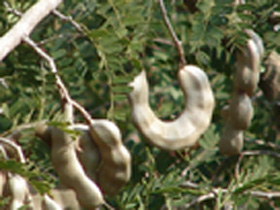 Acacia seed, as seen in these seed pods, is the most common means of growing Acacia trees, although a number of the many species of acacia have also been propagated from cuttings.

The genus Acacia belongs to the family Mimosaceae and are related to both the Locust and the Mimosa trees. There are approximately 1350 species found throughout the world and close to 1000 of these are found in Australia.

Australians celebrate Wattle Day on the 1st of September each year.

Acacia wood is a beautiful hardwood. In the Bible, it is called “shittim” and above all others, shittim was the wood God commanded Moses to use to create the Ark of the Covenant into which Moses placed the 2 stone tablets upon which The 10 Commandments were carved.

The entire chapter of Exodus 37 is devoted to the creation of the Ark of the Covenant.

Different varieties of acacia trees are common in many countries such as Australia, Africa, Madagascar, throughout Asia, Israel, Iran, Iraq, South America, southern parts of the United States as well as in the Pacific.

Acacias are found in a wide range of differing habitats from coastal, wet and tropical to sub-alpine (just below treeline), but are most prevalent in the arid and semi-arid areas.

Unlike most other plants, they will even grow on beaches and in rocky areas… near the ocean taking their moisture from the saltwater!

Each year the tree flowers (usually yellow, sometimes white or cream-colored) and afterward, seed pods which are about three inches long, containing from five to six brownish-black seeds, ripen and turn from green to brown. When fully ripe, the pods split to release the seeds.

Interestingly, unlike most plants, the acacia seeds have a hard coating which, in most cases, is nearly impervious to water, therefore, germination does not usually occur unless some sort of pretreatment is first carried out.

In nature, the seed’s hard coating is typically only broken down by the heat of a brushfire.

Rub each seed with sandpaper or a nail file to reduce the thickness of its hard, outer coating shell so that moisture can penetrate inside, then place into a thermos of hot, but non-boiling water overnight to see if the seed will swell.

Check them the next day. The infertile seeds will float to the surface and should be discarded. Swollen seeds can be sown and the remainder should be retreated by repeating the process by dumping the thermos water out and putting new hot water onto them.

Remember, you do not want to cook the delicate seed, inside, but only open the hard coating of its shell so that it may accept water and begin to open and put a tap root out.

Depending on the species, the seeds grow into either acacia trees or shrubs, which are hardy in many climates, but are not a long-lived tree. The typical lifespan of acacia is between 30 to 40 years.

Acacia seed as a human food source has been a subject of increasing interest and research in recent years. Much of this work is based on understanding the traditional Aboriginal use of many of these species.

While the seed from most of the wattle varieties are generally thought of as being poisonous or generally inedible, there are a few exceptions. Forty-seven species of wattle trees growing in southern Australia produce seeds which are suitable for human food. Some species of acacia are also used as stock food, for example, the pods of A. farnesiana (prickly Moses) and A. cambagei (gidyea) are eaten by sheep.

In both Australia and Africa, there are several species of acacia seed which are edible. Seed is eaten and prepared in different ways by indigenous (originating and living naturally, usually off the land) Aboriginal Australians and is beginning to be marketed to other countries.

The young green pods were eaten raw or the green pods were roasted or steamed (e.g. A. ramulosa var. linophylla and A. palustris). Dry, mature seed was ground into a flour, mixed with a little water and eaten as a paste (e.g. A. murrayana (Colony Wattle) or cooked as a porridge or mush. (A. aneura has a nutty flavor). Uncooked seed from a small number of species were removed from the pods and eaten raw as a ‘snack food’ (e.g. A. craspedocarpa, Hop Mulga).

The energy content is high in all species tested. The seed of the edible wattle variety are low glycemic index foods. The starch is digested and absorbed very slowly, producing a small, but sustained rise in blood glucose and so delays the onset of exhaustion in prolonged exercise or sports, which is especially useful to people in areas of high heat indexes.

Subsequent laboratory testing and human dietary trials on the species grown in Niger in Africa have shown that the seed is highly nutritious and safe to eat. Wattle seed, is now a valuable part of the diet of people in that area and provides a much needed insurance against the recurring threat of famine.

The seeds of the tropical arid zone species, such as A. elachantha (Kalkardi), A. thomsonii (Thomson's Wattle), A. tumida (Pindan Wattle) and particularly A. colei (Cole's Wattle), are currently being studied and show great promise as a new human food source in the semi-arid regions of the Sahel, West Africa.

Research has shown that these fast-growing species produce large crops of palatable, nutritious seeds, which are easy to establish in the field, show excellent survival statistics and produce heavy seed crops within two years of planting. The edible Wattle variety are then processed using local technology and the resulting ground flour has been incorporated into local recipes.

Acacia seed from some specific Acacia species (not all), also provide a valuable food source not only to humans but to birds and other wildlife.

Caution: Please do not attempt to collect acacia seed, yourself, unless you are trained to do so. Many species of acacia contain toxic compounds and are not suitable for food.

Care needs to be taken in the choice of species and acacia seed collection should only be performed by a knowledgeable professional and, therefore, should only be purchased from a trusted and reputable source.

Acacia seed extract is added to sweet or savory sauces, dairy desserts and is also used as a coffee-like beverage.

The low-glycemic index of the seed also suggests possible potential in the diet of diabetics.

Ground roasted Wattle seed is now in high demand for use as a ground flavoring product in pasta, biscuits, pastries and breads and with its very unique, rich-roasted, toasty flavor, it complements the flavoring in pancake batter, desserts, (mousse, creme brulee, anglaise) and baked products such as muffins, breads and shortbread.

Wattle seed gives off a chocolate-coffee-hazelnut blend of aromas which are now very popular as a flavoring in desserts, especially ice-cream! (see recipe, below).

This edible Wattle seed is a bushfood product and is still collected almost exclusively by Aboriginal people from the Australian bush country.

As such, wattle seed is not yet grown on a mass commercial scale and the demand far exceeds the supply. However, edible acacia seed is now being exported in small quantities to the US, Canada, UK, France, Japan and SE Asia.

Add a teaspoon of the premium wattle seed into a glass and add just enough water to fully cover the acacia seed / wattle seed grounds plus a couple more tablespoons of water.


For smaller quantities, reduce the recipe accordingly and place partially thawed Ice Cream into your blender on low speed to do the mixing for you!