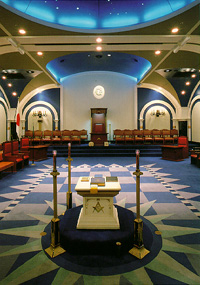 The Masonic term "go dark" means that a lodge ceases to operate as a lodge.

When a lodge "goes dark" or is said to have "gone dark"; it either:

1.  Ceases to exist as a lodge (permanently closes its doors),...or

2.  "Went dark" and ceased to have Stated Meetings for an agreed upon
period of time:

A.  This occurs in farming communities wherein when a large number
of the lodge's members are farmers and must tend to their crops
during the Summer; it is agreed that the lodge should  "go dark"
(no meetings) until Fall when their crops have been harvested.

This also applies to other trades and livelihoods such as if a
large number of the lodge's members are fishermen and are at
sea for periods of time or military lodges whose members are
deployed.

2.  Clean up and or mowing or trimming at Masonic cemeteries
and widow's homes; visiting the elderly or those in nursing
homes and hospitals.

4.  If the lodge offers a Masonic scholarship, the lodge's
delegated scholarship team contacts local area high school(s)
and begins the application process for the next school year.
Masonic scholarships are typically education scholarships
offered by the lodge to qualifying high school students in their
local community who wish to attend university.  Qualifications
vary between lodges, but most are based on a student's
academic grades and their financial need.  There are no
requirements placed upon the student to become a member
of the lodge in the future.

Here is what Albert Mackey, Freemason author and historian, said in his Revised Encyclopedia of Freemasonry (1929) page 262 about "Darkness":

"Darkness has, in all the systems of initiation, been deemed a symbol of ignorance, and so opposed to light, which is the symbol of knowledge.  Hence the rule, that the eye should not see until the heart has conceived the true nature of those beauties which constitute the mysteries of the Order.

In the Ancient Mysteries, the aspirant (candidate) was always shrouded in darkness as a preparatory step to the reception of the full light of knowledge.  Among the Druids of Britain, the period was 9 days and nights; in the Grecian Mysteries, it was 3 times 9 days; while among the Persians, according to Porphyry, it was extended to the almost incredible period of 50 days of darkness, solitude and fasting.

Because, according to all the cosmogonies, (the study of the origin of the universe) accounts of the universe, darkness existed before light was created, darkness was originally worshipped as the firstborn, as the progenitor of day and the state of existence before creation.

The apostrophe of Young to Night embodies the feelings which gave origin to this debasing worship of darkness:


Freemasonry has restored darkness to its proper place as a state of preparation; the symbol of that antemundane (being or occurring before the creation of the world) chaos from whence light issued at the Divine command; of the state of nonentity before birth, and of ignorance before the reception of knowledge.

Hence, in the Ancient Mysteries, the release of the aspirant (candidate) from solitude and darkness was called the act of regeneration, and he was said to be born again, or to be raised from the dead.

And in Freemasonry, the darkness which envelops the mind of the uninitiated being removed by the bright effulgence of Masonic light, Freemasons are appropriately called the "sons of light."

In Doctor Oliver's Signs and Symbols, there is a lecture "On the Mysterious Darkness of the Third Degree."  This refers to the ceremony of enveloping the room in darkness when that Degree is conferred - a ceremony once always observed, but now, in this country at least, (e.g.  United States), frequently but improperly omitted.

The darkness here is a symbol of death, the lesson taught in the Degree, while the subsequent renewal of light refers to that other and subsequent lesson of eternal life.

To "go dark" has no racial connotations, whatsoever, as it is well known that Freemasonry accepts as its members men of all different religions and races.

The term "go dark" does not have any satanic meaning of any kind as Freemasonry is based upon a belief in a Supreme Being.  In different languages around the world the Supreme Being is called such names as:  God, Yahweh, Jehovah, YHWH (as seen in the Torah and the Old Testament), Jehovah, Lord, King of Kings and many, many more, as found in the Holy Scriptures.

Our lifelong quest of attaining more "light" refers to attaining mental illumination and journeying toward becoming a living representation of what the Supreme Being designed us to be upon his "trestleboard", (the Holy Scriptures.)