How To Square Your Square

The 47th Problem of Euclid, also called the 47th Proposition of Euclid, or the Pythagorean Theorem, is represented by what appear to be 3 squares.

To non-Freemasons, the 47th Problem of Euclid may be somewhat mysterious.  Most wonder at the significance of this strange looking, 3-box symbol on a piece of Masonic jewelry.

Most Masonic books, simply describe it as "A general love of the Arts and Sciences".  However, to leave its explanation at that would be to omit a subject which is very important... not only of Pythagoras's Theory, but of the Masonic Square.

What Are These 3 Black Boxes and Why Are They Important to Freemasons?

We are told that Euclid, (the Father of Geometry), who lived several hundred years after Pythagoras, worked long and hard to solve the 3:4:5: ratio puzzle. It is said by some that he then sacrificed a hecatomb (a sacrificial offering to God of up to 100 oxen or cattle). However, historically, it is believed that the Egyptians and Babylonians understood the mathematical usefulness of the 3:4:5 ratio long before Euclid.

The math is the key to understanding this symbol's broader and universal meaning.

The Pythagorean Theorem, also known as the
47th Problem of Euclid or  3:4:5:

The Right Triangle, below, shows the sides of 3, 4 and 5.  The angle created between the 3 (side) and the 4 (side) is the Right angle of the square.

A little later, when we begin to build it, (with sticks and string), you will place your sticks at the 3 corners of this Right triangle.

These are the sacred numbers.

OK, stay with me now...the major math is over.

The essence of the Pythagorean Theorem (also called the 47th Problem of Euclid) is about the importance of establishing an architecturally true (correct) foundation based on use of the square.

Why is this so important to speculative Masons who only have a symbolic square and not the actual square (the tool) of an operative Mason?

The 47th Problem of Euclid is the mathematical ratio (the knowledge) that allows a Master Mason to:

"Square his square when it gets out of square."

...I heard that!  You're saying to yourself:  "Why is that so important to ME in today's world...unless I'm a carpenter? Home Depot is only a few miles away."

The knowledge of how to form a perfect square without the slightest possibility of error has been accounted of the highest importance in the art of building from the time of the Harpedonaptae, (and before).  Harpedonaptae, literally translated, means "rope stretchers" or "rope fasteners" of ancient Egypt (long before Solomon's Temple was built).

The Harpedonaptae were architectural specialists who were called in to lay out the foundation lines of buildings.  They were highly skilled and relied on astronomy (the stars) as well as mathematical calculations in order to form perfect square angles for each building.

In the Berlin museum is a deed, written on leather, dating back to 2000 B.C. (long before Solomon's time), which tells of the work of these rope stretchers.

Historically, a building's cornerstone was laid at the northeast corner of the building.  Why in the northeast?

The ancient builders first laid out the north and south lines by observation of the stars and the sun...especially the North Star, (Polaris), which they believed at that time to be fixed in the sky.

Only after laying out a perfect North and South line could they use the square to establish perfect East and West lines for their foundations.

The 47th Problem of Euclid established those true East and West lines, so the rope stretchers could ascertain a perfect 90 degree angle to the North/South line which they had established using the stars.

If you'd like to perform this yourself, it is actually quite easy...and once you get the necessary pieces together, would be a great "Show-and-Tell" educational instruction piece within your lodge.

The instructions are below, but it is easier to follow the instructions in a step-by-step manner (with string and sticks in hand) than it is to only read them for a complete understanding.

Better still, print numbers 1 through 4, below and then get your sticks and your string ready.

The 47th Problem of Euclid

Unlike the Harpedonaptae, you have no way to establish true North and South...unless you use a compass. But a compass isn't necessary for this demonstration.

However, you WILL be able to create a perfect square...with only sticks and string, just as our ancestors did.

You will need 4 thin sticks which are strong enough to stick them into soft soil, 40 inches of string and a black magic marker.  Actually, any length will work, but this size is very manageable.

The larger the foundation which the Mason wished to build, naturally, the longer his rope (string) would have to be.

Note:  The Operative Masons of old, used rope, however, because much of the length of the rope is within the knot, if you use rope, you must use a longer piece, measure each division, tie your knot, and then measure your next 3 inch  division before you cut the length of rope, instead of marking the entire rope while it is lying flat and then tying your knots.

This forces the creation of a 3:4:5: right triangle.  The angle between the 3 units and the 4 units is, of necessity, a square or right angle.

Now, move your 3rd and 4th sticks until they become a right angle (90 degrees) to your North/South stick.

Congratulations!  You now have not only the ability to square your square, but to lay a geometrically correct cornerstone for your new foundation!

However, usage of the 47th Problem of Euclid doesn't end here...

Here is the rest of the story... 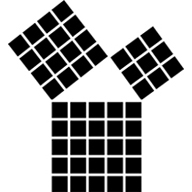 The Forty-Seventh Problem of Euclid
in Today's World

With this simple geometric 3:4:5 ratio of how to create a 90 degree, Right Angle:

With the knowledge of this simple geometric ratio, (provided by the 47th Problem of Euclid), the word "Eureka!" almost palls in expressing the fundamental powers which our Creator has bestowed upon us!

...AND it all begins by simply learning how to Square your Square.

Oh!..., and one last thing you have also learned (but may not have realized it)...

This is why the old antique, wooden carpenter squares which you have seen or have heard about have one longer leg.

You can now see the right triangle (white space in the middle) which is surrounded by the 3 "boxes".

From this day forward, when you see this graphic image denoting the 47th Problem of Euclid,...this Masonic symbol, it will not just look like 3 odd-shaped black boxes to you. You will see the 3:4:5 ratio and the square (right angle) within them and know that you have the power to square your square within your own Middle Chamber.

...And THAT is the Rest of the Story!