Freemasonry and the Bible 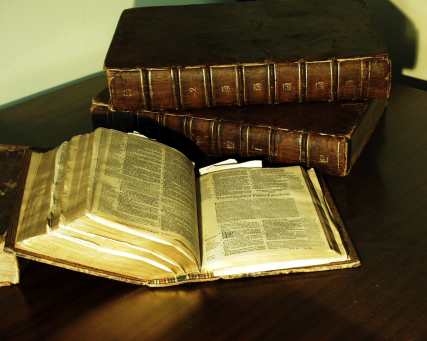 Freemasonry and the Bible...From the first Hebrew texts upon papyrus and leather scrolls, the Old Testament, as we know it, today, comes down to us, through the ages.

The Bible in the foreground of the picture, above, is a Geneva Bible from 1581.  It is leather and tooled in gold.

Q:  Why is a basic understanding of Bible genealogy important to a Freemason, today?

A:  The reason is that Freemasonry has biblical foundations.

Q:  Is a Freemason Bible any different than a regular Bible?

The Bible (from the Greek word, biblia) is for all Christians the most sacred of books, the source of truth and the revelation of God's word.  Throughout the millenniums (thousands of years), no other book has been reproduced and translated as many times as the Bible.

No original manuscripts are known to exist...only copies of copies and via the many translations, many errors have invariably crept in.  Written some 3300 years ago (1300 B.C.-100 A.D.), the Bible continues to be, by far, the most popular of books.

Much of Freemasonry is based upon biblical scripture and biblical characters.

....just as the Holy Books of other religions are central to their Freemason foundations.

The Creator:  It is to the Supreme Architect of the Universe, our Creator, he of many names around the world, that each of us worship.

Masonic Symbols:  Ark of the Covenant, the Mosaic Pavement, Jacob's Ladder, the Lambskin Apron, King Solomon's Temple and others.

Masonic Ritual Degree Verses:  The 3 verses within the 3 Masonic Degrees of Entered Apprentice, Fellow Craft and Master Mason are direct quotes from the Bible.

Masonic Altar:  The Masonic altar holds a Holy Book (or several Holy Books, depending upon the personal religions of its members).  It is around this Holy book that Freemasons circumambulate in their attempts to perform acts pleasing to the Creator.

Masonic Charity:  The origins of Masonic charity begin with The Good Samaritan. (Luke 10:25-37)

And so it is written that no man should ever engage in any important undertaking without first invoking the aid and blessing of Deity.

The table, below, provides the Old Testament Bible Genealogy of the most famous Hebrew, Greek, Latin and English Bible translations.

Freemasonry and the Bible

Many more Bible translations have been performed since 1952.

Freemasonry and the Bible go hand in hand, but throughout the centuries, different Bibles have been placed upon the Masonic altar. ..from the time of Freemasonry's Old Charges (1390 - 1714) and before, as well as to the current period.

While Holy Books from all languages reside upon the many Masonic altars around the world, it is of note that for English speaking Freemasons, whose Masonic lodge uses the Bible, the Bible of today is, like all Bibles, a translated version of the original Hebrew texts.

The Septuagint's name derives from the 72 Jewish scholars who translated the Hebrew to Greek.  Their work was performed in Egypt.

It was necessary to translate the Hebrew to Greek because the Jewish people living in Egypt at the time, spoke and understood Greek, rather than Hebrew.  This Greek translation was in use at the time of Jesus.

The first rendering of the entire Bible into Latin was St. Jerome's Vulgate, a named deriving from vulgatus, meaning for common use.

For a thousand years, St. Jerome's was the only authoritative Bible in Western Europe, but, ironically, it was seldom read by the common people.

It is interesting to note that the Wycliffe Bible of 1382 was available close to the time in which the first of the Old Charges were written.

John Wycliffe was among the first of many Englishmen to incur the Church's wrath for producing unauthorized translations of the Scriptures, as well as for his heretical writings.

William Tyndale, another English translator who was persecuted by the Church, fled to the Low Countries, where he was strangled.

Also, of note, Henry VIII had copies of the Great Bible chained in order to foil overzealous worshippers.

The Geneva Bible was a Puritan version.

The Douay Bible was translated in Douai and Rheims, France by Roman Catholics fleeing Queen Elizabeth.  It has remained as a favorite of English-speaking Catholics.

The most popular version among Anglicans and Protestants has been the King James, whose grand style influenced all English prose.

The information on this Freemasonry and the Bible page is gratefully acknowledged and credit is given to The World's Greatest Religions, Time Inc. Life, Simon & Schuster, Inc., 1957.